Skip to main content
Close Search
All Posts By

Funding of up to £1,000 for farming sector women available

Women & Leadership International is administering a national initiative to support the development of female leaders across the UK’s farming sector.

Expressions of Interest
Find out more and register your interest by completing the Expression of Interest form here prior to Wednesday, 16th October: www.womenandleadership.org/farmagri

Could your surplus food be a lifeline for charities? 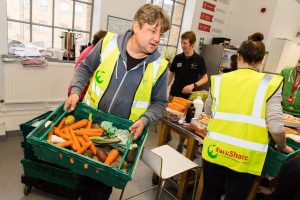 Globally, one third of the food we produce is wasted. When you consider the resources involved in growing, preparing and transporting the food, that figure is even more shocking. Until now, there’s been very little incentive for growers to offer their surplus food to charities

because the cost of harvesting and transporting unwanted crops left them out of pocket. That inevitably meant it was often seen as easier to plough crops that could have been eaten by people back into the ground or send them to anaerobic digestion than to give them to those in need.  But, with a growing ‘zero waste’ movement, and increasing pressure from consumers, growers and food businesses are waking up to the problem and pledging to take action – redistributing their edible surplus to frontline charities where it can do the most good.

FareShare is the UK’s largest food redistribution charity, taking in-date surplus from growers, packers, manufacturers, suppliers and retailers and the hospitality sector and redistributing it through a network of 11,00 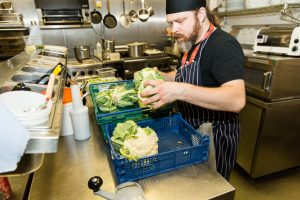 0 frontline organisations, such as homeless hostels, school breakfast clubs, food banks and hospices. Jo Dyson, FareShare’s Head of Food, at FareShare, says: “In five years the amount of food we’ve delivered to charities has tripled reflecting the increasing priority that many businesses are placing on tackling food waste in the most socially responsible way. We really appreciate the support we receive from industry, however there is still a lot to do.”

Despite the organisation’s size and reach, FareShare is currently only re-distributing eight per cent of the UK’s surplus and as Jo Dyson explains: “According to WRAP, over three tonnes of food is wasted before it even leaves UK farms, or is used to feed animals rather than people. Assuming two thirds of this could have been eaten, that’s enough to create over four and a half billion meals for UK citizens each year…a staggering figure.”

FareShare works with more than 500 companies across the supply chain – from growers to packers and food processers, hauliers, food retailers and hospitality chains, and big brands to small, independent producers.

“Surplus is inevitable, but food waste doesn’t have to be,” says Jo Dyson. “We have 21 regional centres across the UK – which puts us at a huge advantage because we can quickly and safely transport surplus food into our network and redistribute it onwards to frontline charities supporting those in need.”

Crucially, previous disincentives for growers to ‘do the right thing’ with their surplus have now been removed. This year DEFRA announced a new fund which aims to make diverting surplus food to charities cost-neutral. As a recipient of the grant funding, FareShare is now able to compensate growers for releasing more surplus food through its Surplus with Purpose Fund . This fund offsets any additional cost barriers – for example labour costs, additional processing costs or the expense of packaging and storage. Additionally, FareShare will work with producers to make food redistribution as time efficient as possible.

So what are the benefits for farmers? “As well as helping businesses to reach their sustainability targets, redistributing food to charities is a great way to engage customers and boost staff morale,” says Jo Dyson, FareShare’s Head of Food. “When you do the right thing, word gets out….and in this case it benefits everyone.”

The £3m FareShare Surplus with Purpose Fund is available for a limited time only. To find out more visit fareshare.org.uk/surplus or call 02070648911

Organic Growers Alliance have announced that they will be hosting this years ‘Organic Matters, Horticulture Conference’

Please see below for more information 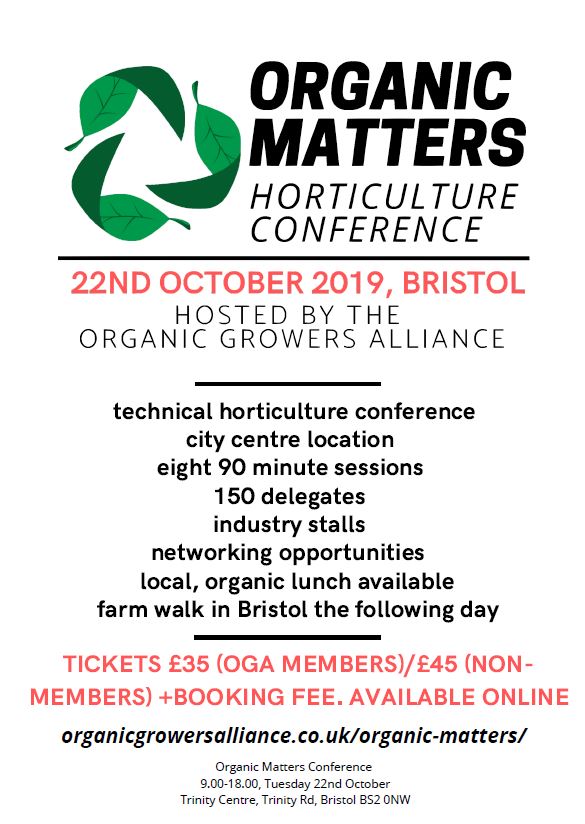 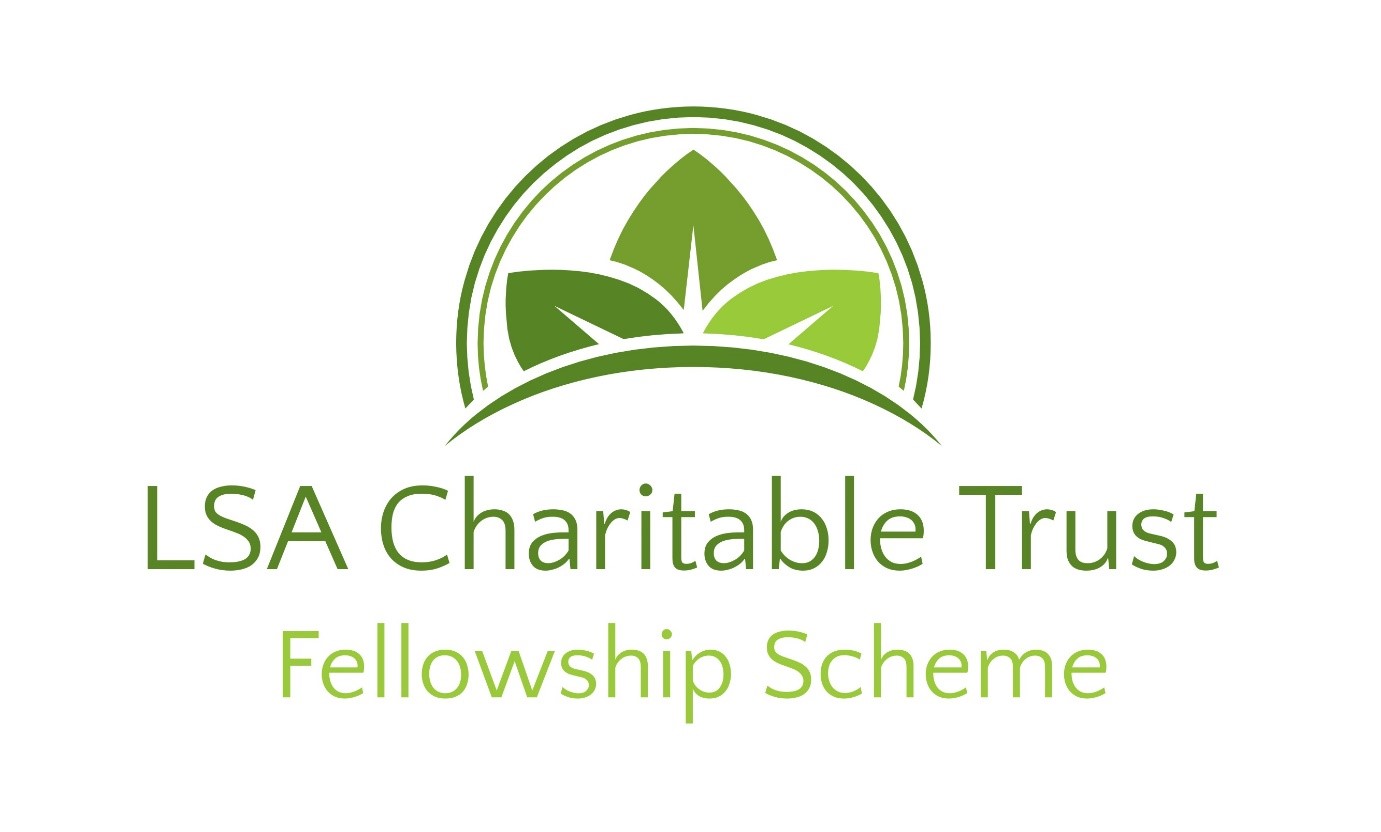 The LSA Charitable Trust Fellowship Scheme application will open on Monday 2nd September 2019 and will close on Thursday 31st October 2019.

Please see below for more details. 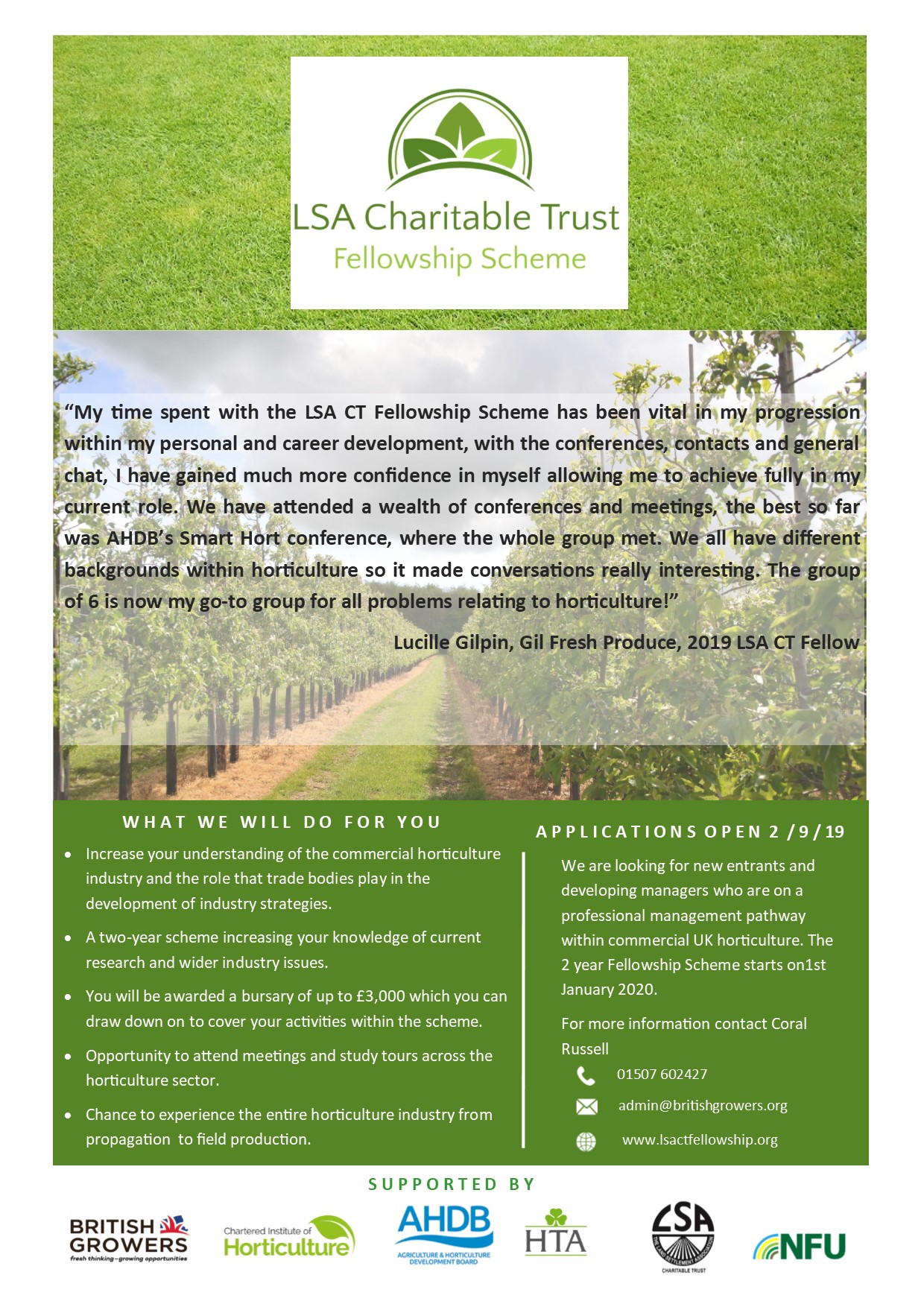 The LSA CT Fellowship are seeking news entrants or developing manager within horticulture to apply for the Fellowship Scheme.

John Cappalonga of Gee Vee Enterprise said: “The LSA Trust has set up a Fellowship scheme to develop six promising individuals per year that prepares students for Horticultural leadership in a wide variety of settings within the industry. This comes at a very crucial and exciting time for Horticulture as we seek to improve and modernise in tune with 21st Century techniques of growing and preparations for Brexit.”

Within the Fellowship the individual will have the opportunity to attend; ‘Technical Meetings’ covering topics such as crop protection, resources, and productivity, a Study Tour, Technical/strategic committees of the participating trade bodies and attend a series of the visits where Fellows host the members of their cohort at their place of employment

The Fellowship launched in January 2019 and the first 6 Fellows have been immersed in the scheme for 7 months attending a plethora of industry events and meetings.

“Being part of the LSA fellowship scheme has been a real privilege. I have attended multiple events that have been both interesting, thought provoking and useful in terms of taking ideas back to my place of work. Many of the events I would not have normally got the opportunity to attend and have benefited me hugely in terms of career development. I also feel the whole process has given me a much better understanding of the horticultural industry. All the Fellows are extremely knowledgeable and having the chance to discuss the similarities and differences between how our businesses operate has really opened my eyes to different ways of working and thinking. There is a huge range of diversity in terms of the different areas of the horticultural industry each fellow works and this has meant I have been able to learn a lot about areas of the industry I wouldn’t normally be exposed to. I would highly recommend the LSA fellowship scheme to any young person who is looking to expand their knowledge and understanding of the horticultural industry. ”

Here are the top reasons why you should be applying for the LSA CT Fellowship Scheme:

Applications for year two of the Fellowship will be open from the 2nd of September, visit www.lsactfellowship.org for more details.

Cauliflowers & cabbage shortage due to weather

Cauliflower, sprouts, white and red cabbages are likely to be in short supply due to extreme weather conditions. A spokesman for the Brassica Growers Association described the situation as very concerning. June saw record amounts of rainfall in Lincolnshire – as much as 6 inches in a week. This resulted in flooded and damaged crops which has led to a shortening of supply. Crops can withstand a reasonable amount of variation in weather but the conditions in June were too much and as a result crops have suffered, and this is leading to a shortage of supply.

Ironically the supply situation has been made even more difficult by extreme temperatures on the continent. In an ordinary year, parts of Europe would make up any shortfall in the UK supply chain, but Europe has been experiencing its own weather extremes. While the UK was contending with flood conditions, Europe was suffering from record temperatures.

Crops thrive best on a balance of warmth, light and water. Last year, we experienced the Beast from the East followed by a record dry spell and extreme temperatures. This year we started with a dry winter and an early spring but then moved into a period of record rainfall and low light levels followed by record breaking temperatures. These extreme variations don’t make for ideal growing conditions.

A spokesman said there is only so much technology that can be applied to producing food and the weather will always have the upper hand. No amount of planning or programming can account for the conditions we have seen over the past couple of seasons. Growers start the season with a clear plan to provide customers with quantity and quality of produce they are looking for. But when the weather turns against you and that plan goes off track, there is virtually nothing that can be done to rectify the situation.

The situation has been aggravated by the reduction of area being planted due to poor returns over the last few years. Growers only grow just enough for their customer programmes and when there are issues due to the weather this leaves a shortage which cannot be filled.

Jack Ward CEO British Growers commented that there is a danger that we take food production for granted and expect our supply chains to deliver irrespective of the conditions. Over the past two season we have seen extraordinary weather conditions and inevitably this influences supplies. 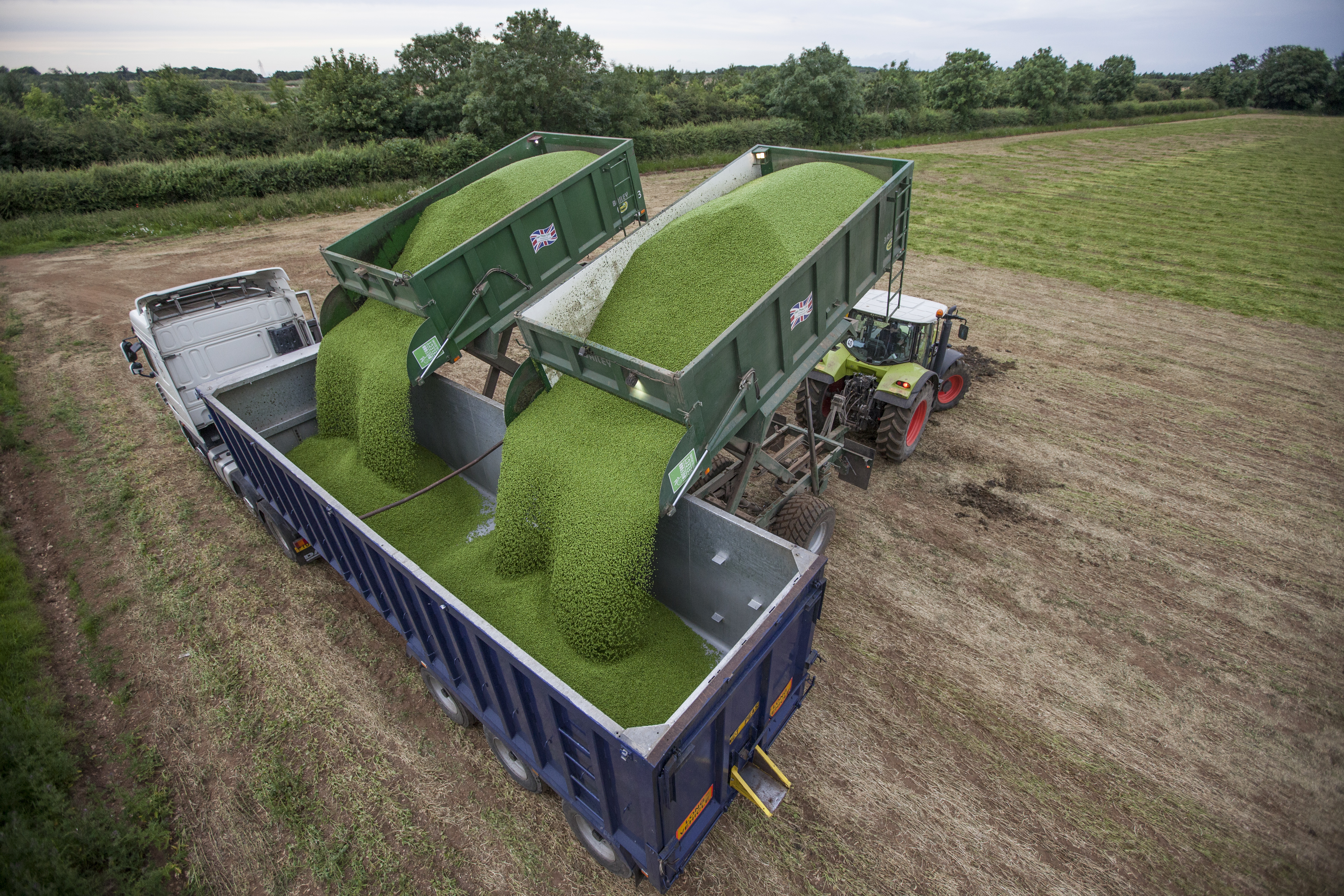 The third biennial Vining Pea and Bean Industry Conference is back. You can officially save the date in your dairies for Tuesday 5th November 2019! The event will be held at the KingsGate Conference Centre, Peterborough.

ICL have very kindly offered to sponsor the event, which promises to be another key industry event.

We are in the process of putting the programme together but can release that the conference will cover theses key areas:

This event will be bigger and better than 2015, so please save the date.

The conference is aimed at growers, managers, agronomists, processors, seed companies, crop protection specialists and machinery manufacturers from the vining pea industry and will be free to attend.

More details of the Conference will follow but you can register for your free delegate ticket here .  If you do have any enquiries in the meantime about the event, please contact Coral Russell at British Peas and Beans. 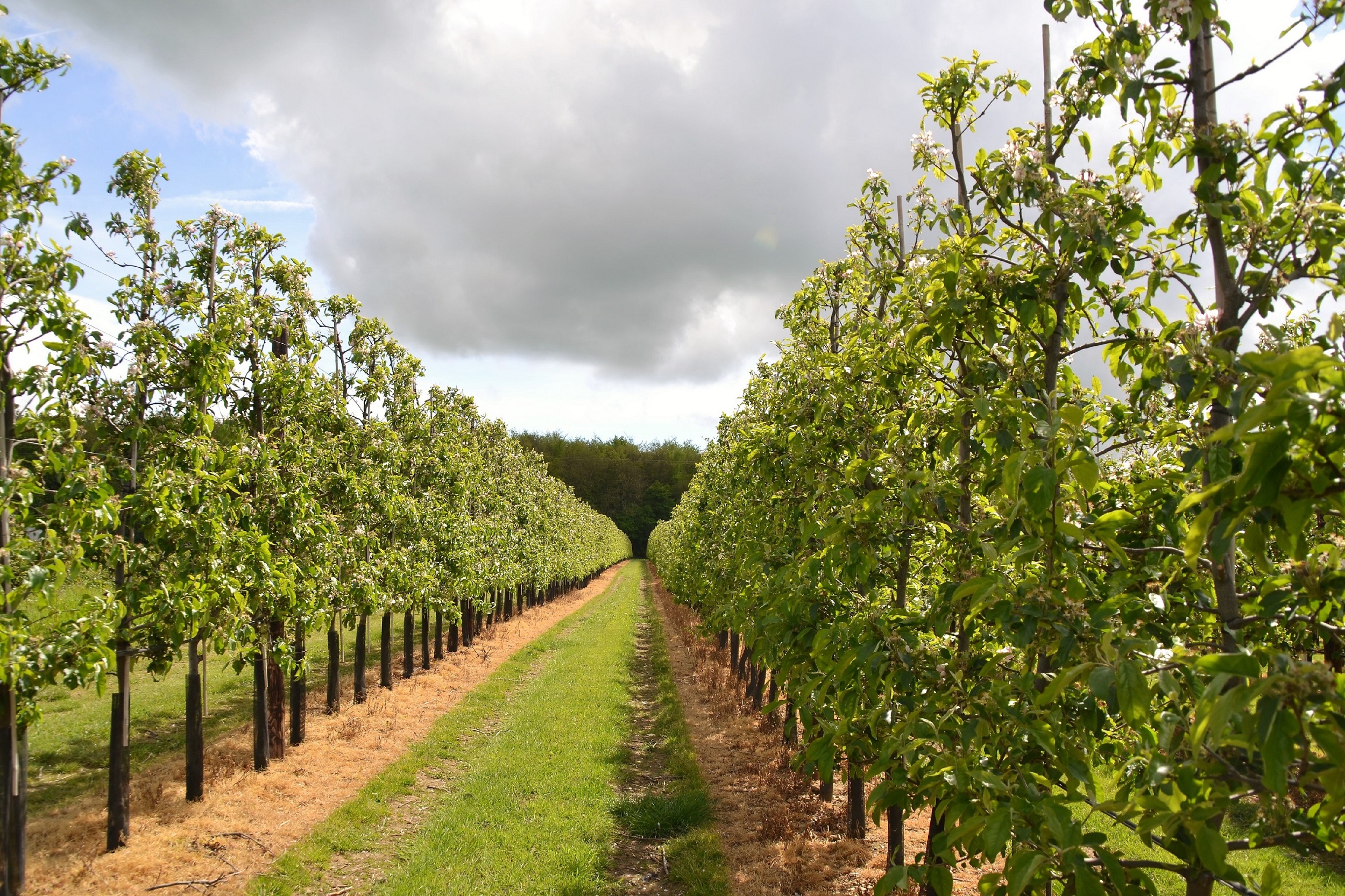 The UK should commit to growing the supply of UK Fruit and Veg and using them more in everyday foods. This was a key recommendation from the RSA’s Food, Farming and Countryside Commission report, Our Future Our Land, published earlier this week.

Welcoming the report British Growers Association Ltd Chief Executive, Jack Ward said ‘ this recommendation mirrors the message we have been putting out, that the UK needs to take on board the advice to increase the proportion of fruit and veg we consume and to think long and hard about what the UK needs to do to increase the volumes of fruit and veg grown here in the UK’.

Slowly but surely, we are seeing an alignment around growing and consuming more fruit and veg. As we move away from the constraints of the CAP and towards a more UK orientated agricultural policy, there is the option to take a long hard look at how more support and encouragement can be given to the production of fruit and veg.

Research and innovation, labour and skills and capital investment will be critical to maintaining a vibrant, sustainable and profitable fresh produce industry in the future. In season, the UK can compete with the best in the world, providing UK consumers with a great choice of high-quality fruit and veg with known provenance.

The RSA Commission report underlines everything we have been saying about the opportunities which should lie ahead for the UK fresh produce industry.

The RSA’s Food, Farming and Countryside Commission’s report, Our Future in the Land, sets out radical and practical ways for policymakers, businesses and communities to respond to the challenges for our food systems, countryside and rural communities.

For more details about the report see www.thersa.org 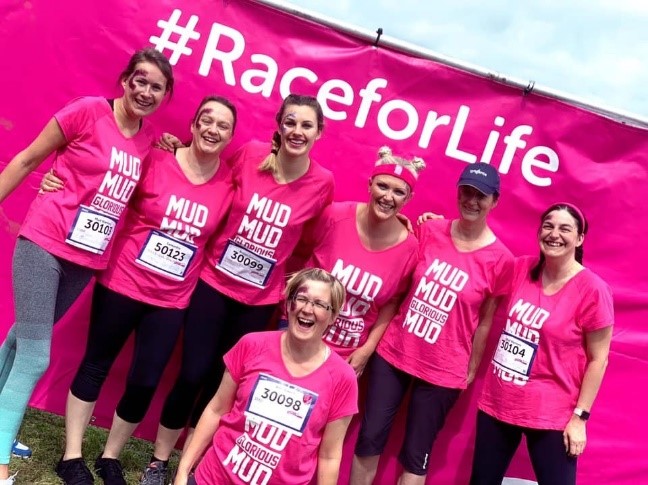 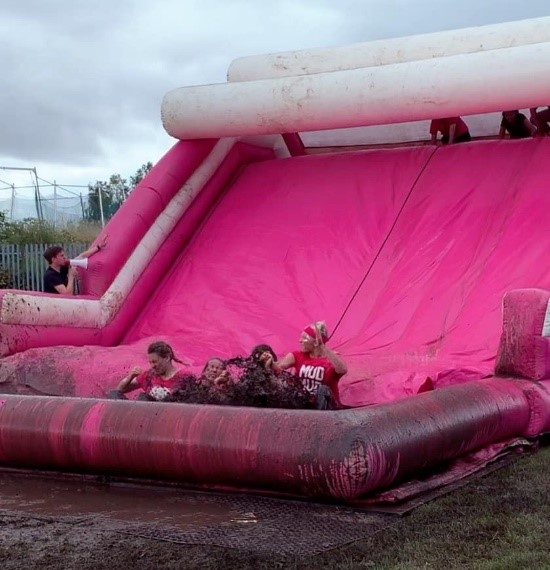 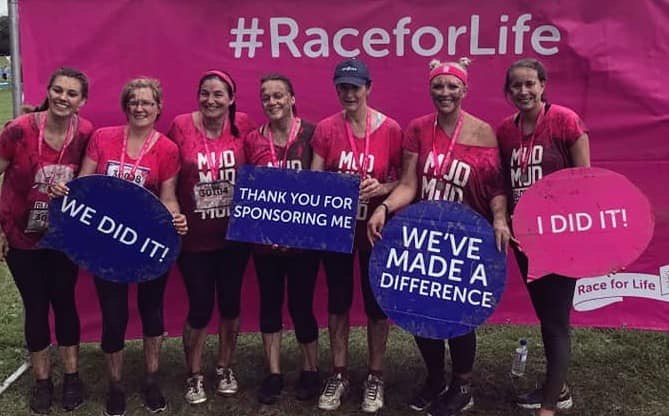 The British Growers team have made it through the Race for Life, Pretty Mudder raising £759.00. The team battled their way through mud pools, under cargo netting and over obstacles they looked filthy by the time they were through.

We would like to thank everyone who supported the team, donating money and cheering them on during the day.